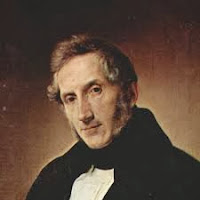 That branch of the Lake of Como, which turns toward the south between two unbroken chains of mountains, presenting to the eye a succession of bays and gulfs, formed by their jutting and retiring ridges, suddenly contracts itself between a headland to the right and an extended sloping bank on the left, and assumes the flow and appearance of a river. The bridge by which the two shores are here united, appears to render the transformation more apparent, and marks the point at which the lake ceases, and the Adda recommences, to resume, however, the name of Lake where the again receding banks allow the water to expand itself anew into bays and gulfs. The bank, formed by the deposit of three large mountain streams, descends from the bases of two contiguous mountains, the one called St. Martin, the other by a Lombard name, Resegone, from its long line of summits, which in truth give it the appearance of a saw; so that there is no one who would not at first sight, especially viewing it in front, from the ramparts of Milan that face the north, at once distinguish it in all that extensive range from other mountains of less name and more ordinary form. The bank, for a considerable distance, rises with a gentle and continual ascent, then breaks into hills and hollows, rugged or level land, according to the formation of the mountain rocks, and the action of the floods. Its extreme border, intersected by the mountain torrents, is composed almost entirely of sand and pebbles; the other parts of fields and vineyards, scattered farms, country seats, and villages, with here and there a wood which extends up the mountain side. Lecco, the largest of these villages, and which gives its name to the district, is situated at no great distance from the bridge, upon the margin of the lake; nay, often, at the rising of the waters, is partly embosomed within the lake itself; a large town at the present day, and likely soon to become a city. At the period of our story, this village was also fortified, and consequently had the honour to furnish quarters to a governor, and the advantage of possessing a permanent garrison of Spanish soldiers, who gave lessons in modesty to the wives and daughters of the neighbourhood, and toward the close of summer never failed to scatter themselves through the vineyards, in order to thin the grapes, and lighten for the rustics the labours of the vintage. From village to village, from the heights down to the margin of the lake, there are innumerable
roads and paths: these vary in their character; at times precipitous, at others level; now sunk and buried between two ivy-clad walls, from whose depth you can behold nothing but the sky, or some lofty mountain peak; then crossing high and level tracts, around the edges of which they sometimes wind, occasionally projecting beyond the face of the mountain, supported by prominent masses resembling bastions, whence the eye wanders over the most varied and delicious landscape. On the one side you behold the blue lake, with its boundaries broken by various promontories and necks of land, and reflecting the inverted images of the objects on its banks; on the other, the Adda, which, flowing beneath the arches of the bridge, expands into a small lake, then contracts again, and holds on its clear serpentining course to the distant horizon: above, are the ponderous masses of the shapeless rocks; beneath, the richly cultivated acclivity, the fair landscape, the bridge; in front, the opposite shore of the lake, and beyond this, the mountain, which bounds the view.
Pubblicato da monteverdelegge a 13:00

Per info scrivere a monteverdelegge@gmail.com